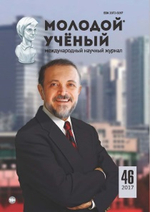 Abstract: The article presents the results of studying of Cyflunite flock impact on the biochemical parameters of blood. The results of the study show that the therapeutic and prophylactic treatment of sheep with Cyflunit Flock causes less significant changes in protein values of blood of sheep. Therefore, the treatment of sheep with Cyflunit Flock does not have any significant impact on the protein metabolism of animals.

Myiasis of agricultural animals are widespread in all regions of the Republic Kazakhstan and cause significant economic damage to livestock.

Wohlfahrtiosis belongs to the group of so-called malignant myiasis and animal of different species are susceptible to disease, but it occurs more often among sheep, especially during the warm season. Larvae of Wohlfahrtia magnifica flies belonging to the family Sarcophagidae, which infest the wounds and mucous membranes of animals, cause this disease.

All kinds of animals are susceptible to wolfarthyosis, but it sheep and camels suffer from it the most frequently. In Kazakhstan, the disease hits about 50% of sheep, especially the rams and dams. The maximum peak of infection coincides with the transhumance of sheep and is noted in the second half of June in eastern and western Kazakhstan, in June and July it is noted in the northern Kazakhstan, and it takes place in May and August in the southern part of the country. The intensity of invasion is about 80–90 larvae per animal (Akhmetov, 2006).

The homeostasis impairs significantly due to the mechanical and toxic impact of Wohlfahrtia magnifica flies larvae, which infest the body of sheep. The places of localization of parasites are underwent to the inflammatory processes with further infection with pathogenic microbial flora. It leads in its turn to the violation of the immune status of the organism, reduction of oxidation processes, decrease in productivity, breeding qualities and birth of weakened young animals. Wohlfahrtiosis is one of the important causes of the economic losses in sheep breeding and especially in the farms, where this industry is sufficiently developed; therefore, there is a necessity of system of regular preventive measures (Tolokonnikov, 2004).

The company NITA-PHARM developed a new insecticide Cyflunit Flock for control of insects in livestock. The drug as an active substance contains cyfluthrin, which belongs to group of synthetic pyrethroids, and has the contact insecticidal action.

Many physiologically active substances, such as enzymes, vitamins, hormones, regulate the route and intensity of metabolism in bodies of animals, and all these substances are in close interrelationship and interdependence.

The metabolism bases on the biological processes, which manifest their complex and contradictory nature at all stages of the body development. The biochemical blood tests allow identifying the intimate processes occurring in the body and its systems during the taking of medicines (Komov, 2004).

The study of protein metabolism in sheep, which undergo the treatment with medicines, is of significant interest for toxicological analysis. The study of this indicator is of great importance because the protein complex of blood participates in immune-biological protection of organism, transferring of metabolites, detoxification and elimination of various poisons and carries out the connection of fats, phosphates, vitamins, and hormones.

The labile indicator of the toxicity drug is protein fractions of blood serum from treated animals. The most mobile of them are albumins, which are synthesized in liver and contain in their composition 19 essential amino acids, carbohydrates, lipids. Albumins are important in maintaining colloid osmotic pressure and water-salt metabolism. Together with globulins, they participate in the transportation of hormones, vitamins, and lipids. Globulins (α + β + γ) form the complexes with carbohydrates, lipids, cholesterol, and contain the protein complex, the so-called properdin, which is the activator of synthesis of antibodies (Sagatov, 2007).

Thus, the purpose of our study is to analyze some biochemical parameters of blood in sheep after using Cyflunit Flock.

The objects of the study were the lambs of the Akzhaik meat and wool breed from the Educational and Scientific Center of the Department of Animal Husbandry of the West Kazakhstan Agricultural Technical University named after Zhangir Khan.

The sheep were used for the study were at the age of 1.5 years. Selection of sheep in the experimental group was carried out according to the principle of analogues, all the animals were clinically healthy. The experimental sheep blood from the jugular vein for biochemical studies was taken in the morning, mainly before feeding.

During the experiment, the anticoagulant heparin was added at the rate of 50 units per 10 ml of blood (0.5 ml) in order to obtain the whole, not coagulated blood.

All the laboratory studies were conducted at the laboratories of the Scientific Research Center of the West Kazakhstan Agricultural Technical University named after Zhangir Khan.

The calculation was carried out according to the calibration schedule, which was developed based on the indicators of standard working solutions prepared from the basic standard solution of 10% protein. Also, the determination of protein fractions was performed by means of electrophoresis, when dry membranes were carefully placed on the surface of the electrophoresis buffer, avoiding their rapid immersion, and allowed them getting wet fully. The wet membranes were gently blotted between sheets of dense filter paper, preventing them from drying out. Before applying the samples, the pre-cut phase was carried out: the membrane was placed into electrophoresis chamber, where it was exposed by the current of selected mode during 10 minutes. With the help of the applicator, the serum samples were analyzed at the distance of 2-3 cm from the cathode edge of the membrane. After switching off of the current, the membrane was carefully transferred to the dye solution for 3-5 minutes, then twice for 3 minutes in a 5-7% solution of acetic acid (before bleaching the background). The electrophoregram was processed with the help of the program (Kondrakhin, 2004; Smirnova, 1960; Topfer, 2004). The obtained results were processed by the variational statistics method according to GF Lakin (Lakin, 1990).

The results of the study and their discussion

Studying the parameters of protein metabolism, we noted a number of changes that occurred in the body of experimental sheep under the impact of the drug.

The use of the drug Cyflunit Flock caused a slight decrease in the total protein content in blood of sheep. 3 days after, this indicator reached the level of the initial data.

Evidently, the noted changes in the albumin content are induced due to the impact of the drug on the protein-forming function of the liver in connection with its participation in the detoxification processes of the organism and the removal of toxic agents from the body.

The increase in globulins does not exclude the possible activating impact of Cyflunit Flock on the reticylo-lymphoplasmatic system of the organism, which is responsible for the synthesis of this protein fraction.

These data indicate that the treatment of sheep with Cyflunit Flock does not have a significant impact on the protein metabolism of animals.

Therefore, therapeutic and prophylactic treatment of sheep with Cyflunit Flock result in less significant changes in values of blood protein in sheep treated with this method.