Modelling as method of scientific knowledge of physical processes 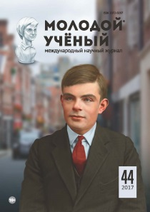 The article deals with computer simulation of physical phenomena and processes, which is the most promising direction of using information technologies in physical education.

At modern comprehensive school the conscious understanding of physical processes demands deep studying of the structure of atoms, molecules, crystal structures of bodies. The course of chemistry of high school is under construction on the basis of the nuclear and molecular theory, Avogadro's law, laws of constancy of structure and preservation of mass of substance, the Periodic Table of D. I. Mendeleyev, the theory of substances’ structure.

Formation of concepts about a structure of substance belongs to one of the most important tasks in a technique of training of chemistry. The word «model» comes from Latin «modulus» (a measure, a step, a rhythm, size) and is connected with the word «modus» (the copy, an image). V. A. Shtoff notes that roots of this term go back to Vitruviya's works on the art construction; during Middle Ages era the concept model designated the scale (a half of diameter of a column) in which all proportions of the building were expressed [29, 3–4]. Further it accepted value of a sample on which something is created in art. As the sample usually submitted the reduced copy of a subject, similar to object in everything, except the sizes. Subsequently, concept of model began to be used in scientific researches when direct studying of any phenomena was impossible or ineffective. In this case the studied object is replaced with another, simpler and available to research and being in some compliance with the original. This object — substitute is called model of the studied object. Let's give some definitions of concept model: «The model is understood as such mentally represented or financially realized system which, displaying or reproducing object of research, is capable to replace it so that its studying gives us new information on this object» [29, 9]. The model is display of the facts, things and relations of a certain field of knowledge in the form of simpler, more evident material structure of this or other field» [16]». Model, an image (including conditional or mental — the image, the description, the scheme, the drawing, the schedule, the plan, the card, etc.) or a prototype (sample) and

any «object or system of objects («original» of this model), used under certain conditions as their «deputy» or «representative» [7].

In VA. Shtoffa’s article «About a role of models in quantum mechanics» is defined as "... model... is called... the evident idea of a subject inaccessible to direct contemplation formed in consciousness on the basis of analogy to other phenomena known to us” [73, 69].

Thus, in the called cases the model is applied for those functions which the theory, or for creation of the theory would have to carry out.

One of the most important methods of studying of physics is the modeling method. However to this method it is not paid sufficient attention when training in physics that quite often leads to an object identification to its model [25].

In the basis of modeling procedure there is establishment of the relation of similarity between the studied object and some other objects. This procedure is based on preliminary research, both the original, and model.

«Understand such method of knowledge which includes creation of models (or a choice ready) and their studying for the purpose of obtaining new data on the considered physical objects» [17] as modeling.

«We understand a method of the mediated practical or theoretical operating as modeling by object at which directly not the object interesting us is investigated, and the auxiliary artificial or natural system, («quasiobject») which is in a certain objective compliance with informative object capable to replace it at certain stages of knowledge and giving at its research, eventually, information on the most modelled object» [21] is used.

Feature of a method of modeling consists of the fact that object is studied not directly, and by research of other object similar to the first. Between the researcher and object of knowledge there is a model. Thus, it does not cover the studied object completely, and expresses only some parties interesting the researcher. «Modeling is necessary assumes the use of abstraction and idealization. Displaying essential (from the point of view of) property of the original and distracting from insignificant, the model acts as a specific form of realization of abstraction, i.e. as some abstract idealized object» [5].

«Modeling is a special gnoseological procedure during which the knowledge of object arises at the expense of the appeal of the learning subject to a class of subjects (artificial or natural, created or found), in some respects identical investigated, but, owing to their nature of these or those researches, more available to carrying out» [27, 10].

It is obvious that any process in the nature to some extent depends on very large number of factors. The model allows to allocate those factors which are most essential to studying of physical objects from all variety. A basis for creation of model are supervision of natural phenomena and physical experiment. Coincidence of results of experiment to results of theoretical calculations, specifies that this model is applicable to the solution of the studied problem. Discrepancy of theoretical calculations to skilled data shows that in a choice of model the mistake was made. In this case it is required to correct model, or to improve or replace it with new model.

It should be noted that model and modeling aren’t the same. The model creates communication language which, the content of object of research, allows to reveal its essence. The model is artificially created language which provides communication. Distinctive features of models is that they are dynamic and subjects the content of object. On models it is possible to carry out certain subject actions.

V. A. Shtoff emphasizes that at creation of scientific classification of models the right choice of its basis is very important ". It helps to understand essence of the classified models» [29, 11]. Many authors [6, 12, 17, 22, 29] known in science and equipment of model divide all into two big classes: material and ideal.

K. B. Batoroyev believes that «rigid division of scientific models into two classes — material and ideal — cannot form base for the subsequent classification of the models applied in different sciences. It contradicts the principle of material unity of the world and its reflection in consciousness of the person, builds artificial border between material and ideal in bases of scientific knowledge» [1, 19].

In each of the called classes it is possible to point to some types of models depending on the realized ratios of analogy and methods of creation of models.

The great interest is represented by the classification of models offered by V. A. Venikov:

V. A. Venikov suggests to allocate five groups of models [8].

As it was shown above by many authors [8, 24] physical models are allocated in special group of models. We share their point of view. So, when forming quantum representations it is aware of physics of the main school variable models are used. We use the classification of models adapted for our research, offered by B. I. Spassky [26, 13–14]. All models used in physics by it was conditionally divided on. material and ideal (macromodels, micromodels, mathematical, quantum model.

The model is a certain new object which reflects essential features of the studied object, the phenomenon or process. General properties of models. 1) adequacy is degree of compliance of model to that real phenomenon (object, process) for which description it is under construction, 2) an extremity — the model displays the original only in final number of its relations and, besides, resources of modeling of a konechna, 3) simplified nature — the model displays only the essential parties of object, 4) completeness — all necessary properties are considered, 5) approximateness — the reality is displayed by model roughly or approximately, 6) informational content — the model has to contain sufficient information on system — within the hypotheses accepted at creation of model, 7) potentiality — predictability of model and e ѐ properties. Research of objects, processes or the phenomena by construction and studying of their models for definition or specification of characteristics of the original is called as modeling. Modeling is the method of knowledge consisting in creation and research of models. The theory of replacement of objects originals with object model is called as the theory of modeling. The main stages of modeling are: 1) problem definition; 2) development of model, analysis and research of a task; 3) computer (natural, physical) experiment; 4) analysis of results of modeling. At a development stage of model creation of information model, that is formation of idea of the elements making initial object is carried out. If results of modeling are confirmed and can form a basis for forecasting of behavior of the studied objects, say that the model is adequate to object. Degree of adequacy depends on the purpose and criteria of modeling.

The analysis of the maintenance of physics course of 8–11 classes is carried out and tendencies of creation and use of training models of atoms and molecules for a course of physics of high school are defined. The role of models as instrument of activity of the teacher and pupil is shown when studying the section «Substance Structure». On the basis of the analysis of fund of demonstration tutorials and the educational equipment for independent works need of creation of the models of new generation allowing to avoid a fragmentariness and scantiness of assimilation of information is revealed, having provided connectivity and systemacity of knowledge, the models creating a clear image of distribution of electrons in each atom or a molecule on electron shells. For improvement of quality of digestion of material it is very important to rely on earlier gained knowledge. For example, when studying rules of shift at radioactive decay and when studying nuclear reactions it is necessary to lean on conservation laws of weight and a charge widely. Before studying structure of atom it is expedient to repeat concept of centripetal acceleration, laws of Newton, Coulomb's law, and also those data on an atom structure which pupils received in the VIII class at lessons of physics and in the IX class when studying chemistry.

One of the most perspective directions of use of information technologies in physical education is computer modeling of the physical phenomena and processes. Computer models easily fit into a traditional lesson, allowing the teacher to show on the computer screen many physical effects, and also allow to organize new, nonconventional types of educational activity of pupils. In this term paper we use computer course «Open Physics 1.1" as an example.

Let's give an example on the subject «Pine Forest Postulates» with use of the computer course «Open Physics 1.1". 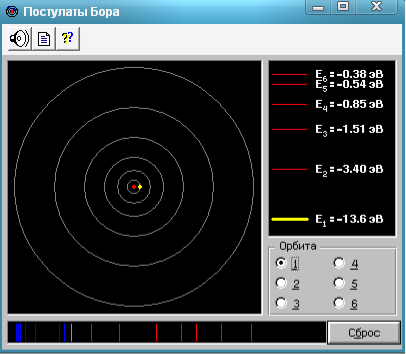 Purpose of the work is to get to know the planetary and quantum models of atom while modeling emission and definition of a constant of Ridberg.

This course is a powerful tool of an intensification of occupations and increases of interest of pupils in physics and it is recommended to the pupils of high schools, technical schools, lyceums, colleges, students not of physical specialties, persons who are independently studying physics, and also to entrants and teachers. The training computer course «Open Physics 1.0, Part I« contains a huge number of interactive computer models which allows to observe on the screen of the computer of simulation of physical experiments, tens videos of natural experiments in a type of separate modules.