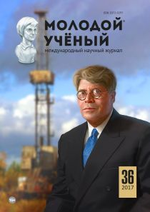 The article covers the aspects and issues of definition priorities in the development of country’s railway. The analysis of the resulting indicators of the work of the Belarusian Railway was carried out, the main problems and reasons for their occurrence were formulated, the perspective direction of the infrastructure development was identified, as well as its general impact on the work of the Railway.

Railway plays an important part in the economic development of the Republic of Belarus. It creates favorable conditions for domestic businesses due to organization of high quality processes of the delivery of raw materials, semi-processed and finished goods, improving working conditions and living standards. Moreover, it makes a significant contribution into the gross value product due to selling tickets to commercial routes. However, in the last decades importance of this means of transportation has decreased (which can be illustrated by the decrease in services’ amount), which resulted in the necessity of research on competitive growth of the Belarusian Railway.

As we concern, the issue of increasing competitiveness should be comprehensive: one should base on a comprehensive study of the Railway, identifying the current negative development trends and their causes, justifying areas of improvement and their possible impact on existing problems. The content of this approach is clearly shown in Figure 1.

Figure 1. The comprehensive approach to the justification of the perspective direction of the development of the railway infrastructure

Stage 1 — analysis of railway transport’s functioning. At this stage, statistical information describing the operating conditions and the results of the work of the Belarusian Railway for the period from 2000 to 2016 was studied. The following data was revealed:

Stage 2 — indication the problems of functioning. Basing on the previous analysis, the following problems of the railway transport’s functioning in the Republic of Belarus can be determined:

‒ negative impact of rail transport on the environment.

Each of the abovementioned problems has its own nature, and therefore the next step (step 3) of the proposed algorithm is to determine the main reasons for the formation of these problems.

Thus, the reduction in passenger turnover is directly related to one of the trends identified in the analysis — the growth of tariffs (prices). The increase in prices has significantly reduced its competitiveness and, at lower rates of growth in the cost of transportation by road and air transport, has led to passenger turnover’s redistribution. At the same time, one can say with certainty that the observed increase in tariffs is caused by an increase in operating costs. The primary reason for both growth in operating costs and tariffs is the use of diesel fuel as the main energy resource, the price of which has a stable upward trend (only in the past ten years the average price per ton increased by 19.5 times).

Deterioration of freight transportation amount is caused by the three factors:

‒ the growth of “political wars”: the deterioration of relations between the countries of the European Union and the Russian Federation is accompanied by a reduction in deliveries to the latter, i.е. decrease in transit traffic through the territory of the Republic of Belarus [6];

‒ increase in operating costs: as in the case of passenger transportation, partly the reduction in freight turnover is related to tariffs’ increase, which, under conditions of deterioration in the overall economic situation in the country, has led to a drop in demand from domestic business entities, i.е. reduction of domestic traffic.

‒ poor infrastructure development leading to a decrease in the carrier’s competitiveness. This influence can be reasoned by the fact that at the modern market of logistics services, the speed of delivery is considered to be rather important characteristic attracting customers. At the same time, we can hardly talk about high speed of transportation within the Belarusian Railway, since the speed of locomotives used for the freight carriage in the Republic of Belarus equals to 100 km/h vs. 140 km/h for the developed countries of the EU and 120 km/h for the Russian Federation.

The next negative aspect of the functioning of the Railway, as noted earlier, is the considerable physical depreciation of the infrastructure and rolling stock, caused by the implementation of infrastructure projects in insufficient volumes and the slow renewal of fixed assets.

The last problem is the negative impact on the environment. It can be illustrated with emission of pollutants and acoustic pollution. This problem, to a certain extent, is based on the use of diesel fuel as the main energy resource. Thus, the gross emission of the previously mentioned pollutants released during the operation of diesel locomotives and diesel trains directly depends on the amount of fuel used, i. e. the main reason for the negative impact of rail transport on the environment is the use of diesel traction. The creation of a strong acoustic pollution is also associated with the predominant use of diesel locomotives and a high degree of depreciation of infrastructure and rolling stock.

Thus, at first glance, each of the identified problems has been formed under the influence of various negative factors. However, a closer examination of them shows that the primary cause of all negative trends is the weak development of the infrastructure. So, it is the level of infrastructure development that determines wear (depreciation), speed, energy used, which, in its turn, directly affects costs and emissions of pollutants.

Stage 4 — justification of the development direction. The abovementioned main reason for the negative trends clearly emphasizes that the further functioning of the Belarusian Railway should include the development of its infrastructure, carried out within the framework of global trends, and the main of them is electrification.

Electrification is a set of activities carried out on a specific railway section in order to obtain the possibility of using an electric rolling stock. Replacement of the diesel traction by the electric one will lead to a reduction in operating costs, which shall prevent the growth of tariffs and attract passengers, while the increase in freight turnover will be based on the improved speed characteristics and the increase in the weight norm for freight transportation. In addition, the electrification program shall lead to the update of infrastructure and rolling stock, minimizing pollutant emissions due to the refusal to use diesel fuel.

Analysis of these advantages leads us to the conclusion that the electrification should become the main direction for the development of the rail transport in the Republic of Belarus, since it shall minimize or completely eliminate the problems identified previously.

First, a tremendous economic effect will be obtained: optimization of the cost of transportation, i.е. reduction of operating costs by reducing the cost of fuel and energy resources for the traction of trains. Thus, in the region to which the territory of the Republic of Belarus belongs, in comparable conditions of operation of traction rolling stock, the cost of fuel in terms of cost when using diesel traction is approximately 1.5 times higher than the cost of electric traction [3, p. 17]. Reduction of the cost shall stop the constant growth of tariffs and fix them at a single level, which shall lead to an increase in the volume of services provided.

In addition, the reduction in operating costs shall be achieved through a reduction in the maintenance and repair costs of locomotives and rolling stock (maintenance of electric locomotives shall require costs which are three times less than locomotives’ maintenance, and half as much than repairs), replacement of brake pads and running parts of trains. It is also possible to reduce the cost of maintaining the superstructure of the track [1, p. 89].

The second effect, obtained from the use of electric traction instead of diesel one, is logistics: increasing carrying and pass-through capacity. Improvement of logistics is possible due to the following:

‒ the greater share of new rolling stock units (increase in weight norm), which can be explained by the specifics of traction characteristics of electric locomotives, which includes the growth of their capacity in conditions of difficult profile and at low speeds, unlike locomotives, the power of which is stable in a wide range of speeds.

Third, in the course of the electrification of the Railway, certain social advantages will be obtained, including the following: creating more comfortable conditions for the carriage of passengers and improving traffic safety [10, p. 247]. At the same time, the quality of service provision will be improved by using a new electric rolling stock (electric locomotives and electric trains) at the electrification sites within the passenger traffic movement, which has higher average speeds allowing to reduce the time spent on the road. This means that electrification shall increase the competitiveness of rail transport in comparison with other means by reducing the time of routes and improving service, as well as increasing traffic safety through smoother braking.

We can make a conclusion that the result of electrification is a significant reduction in carbon dioxide (CO2) emissions. The electrification of the Railway and the use of electric locomotives shall reduce these emissions for passenger traffic by 35 grams/passenger-km, and for freight traffic by 10 grams/passenger-km [11, p. 413]. The second component of the environmental issue is the noise reduction. When replacing current locomotives with the electric ones, noise shall decrease from 80–95 dBA to 75–80 dBA [2, p. 406].

Summarizing the results of each stage of the proposed approach, it can be concluded that the negative tendencies of the functioning of the Belarusian Railway at the present stage determine the electrification as a priority goal for the development of the country’s railway transport. At the same time, the opportunities opening after the implementation of the relevant infrastructure project, to a significant extent, shall help to eliminate the existing problems through the comprehensive positive impact, which can be illustrated as follows (Figure 2). 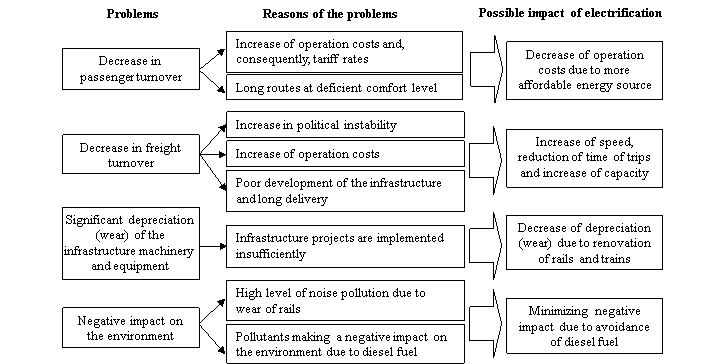 Fig. 2. Result of the analysis

Thus, the work of the Belarusian Railway in recent years can be characterized by a significant drop in efficiency. Under these conditions, the possibility of obtaining a number of advantages from the replacement of diesel locomotives with electric one causes its particular urgency and the need to consider the electrification of the railway infrastructure as a priority for the development of the country's railway transport.