In this article, improving the quality of images obtained from surveillance cameras is implemented. Matrix filters and frequency filter and their principle of operation are described. Some methods are improved by their realization.

To understand how effective an algorithm of enhancement is, the quality of the processed images is evaluated. Firstly, we estimate the effectiveness of suggested removing noise filters and compare the calculated values with such filters as Filter2, Median, and Wiener.

Numerous and different denoising methods of algorithms have already been proposed during the past few decades. Image enhancement can improve many spheres of our life.

The search for effective methods for image denoising is still an actual problem at the crossing of functional statistics and analysis. In despite of the sophistication of the proposed methods during recent time, many algorithms yet have not reached a desirable level of application. Some show a great performance when the image model matches to the algorithm assumptions but fail in common and make artifacts or remove fine structures of the image.

The effectiveness of video monitoring of transport systems depends on many different factors. There is a list of circumstances that create many difficulties in their work. So the efficiency is significantly influenced by difficult weather conditions. The work of video cameras is complicated by changing ambient temperature and lighting, atmospheric precipitation, low illumination, as well as very high illumination on a sunny day.

The main reasons that reduce the quality of images: technical luminance noise of interference character; insufficient or excessive illumination of objects of shooting; lack of sharpness when getting an image; too small details that need to be discerned.

Algorithms for improving the images quality stored in raster graphic formats are becoming more widespread. This is connected to the developing of new methods and technical means of obtaining, transmitting and reproducing images. Image processing algorithms, basically, are focused on eliminating imperfections in technical means and technologies that work with images.

In the case of getting an image through various gripping devices may receive various types of noise which may produce visual distortions. To suppress the noise in the image, the spatial filters are used, they process pixels considering a local neighborhood. The most widely known are the median filter and Gaussian filter.

The Gaussian filter is a blur filter using a normal distribution to calculate the transformation that is applied to each pixel of the original image [9]. Gaussian distribution equation in one-dimensional implementation is the following:

or, in the special case of two-dimensional realization:

— the distance from the origin to the horizontal axis;

— the distance from the origin to the horizontal axis;

— the standard deviation of a Gaussian distribution.

The median filter is more effective in cases when the noise in the image has a pulsed character.

In implementing this filter two-dimensional window is used, which typically has a central symmetry, and its center is located at the current point of filtration. Fig. 1 shows examples of windows versions (in the form of a cross, and in the form of a square), the most often used in different programs for image processing.

To understand the principle of the median filter operation, denote a working sample as the one-dimensional array

; its number of elements equal to the window size, and their location is arbitrary. Typically, the windows with an odd number of points n are used (it is automatically provided with a central symmetry of the aperture and with entering the most central point in its structure). Ordering sequence

, for example, ascending, its median is that sampling unit, which occupies a central position in the ordered sequence. Thus obtained the number is a result of the filtration for the current frame point. The formal designation of the procedure can be represented as:

indicates the function of calculating the median value.

To show the effectiveness of the proposed algorithms in noise removing, it is necessary to make sequential comparison of the results with already proven filters results. The suggested algorithms are implemented for surveillance system images by using MATLAB. To estimate enhancement of the image, we can use the statistical measurement. The Root Mean Square Error (RMSE) and Peak Signal-to-Noise Ratio (PSNR) are used to estimate the enhancement performance [10].

The PSNR reckons the peak signal to noise ratio, in decibels, between two images. This ratio is popular for use when there is a need to estimate quality between the original image and the processed one:

where R is the maximum difference in the original data type. PSNR represents a measure of the peak error.

The RMSE represents the cumulative error between two images — the processed image and the original image:

is original image and

is enhanced image. i and j, m and n are the rows and columns of the original image and filtered image respectively.

Filters for comparison: Filter2 from Matlab, the Wiener filter, the median filter. The median filter has one important disadvantage: it does not take into account the edges of the image.

For this paper we use the median filter with solving this problem in the improved implementation. We process the edges with the entire image, and this contributes to more effective processing of the image.

The calculated values of Average RMSE and PSNR are displayed in Fig. 2. 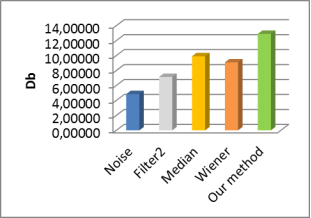 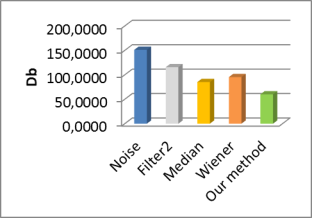 The basis for linear filtration in the frequency and spatial domains is the convolution theorem. In fact, the basic idea of filtering in the frequency domain is to choose a filter transfer function that operates

in a specific way.

, and leaves the low-frequency components relatively unchanged and is called a low-pass filter.

Images and their transformations are automatically considered periodic if the filtering is implemented on the basis of a two-dimensional Fourier transform.

When convolving periodic functions, interference effects between adjacent periods occur if these periods are located close to the length of the nonzero parts of the functions. Such an interference is usually called a return error or an overlap error, which can be suppressed by adding zeros to the functions.

For this experiment a dark image from surveillance camera is taken. For clarity enhancement of the image, we use the improved realization of a frequency filter.

Fig. 3. Original image, an intermediate image with the improved contrast, the enhanced image

The proposed method allows not only to improve clarity of the image, but also to significantly change its brightness and contrast. In purpose to demonstrate the performance of the realized filter, the histograms of the source image and the result image are shown in Fig. 4. 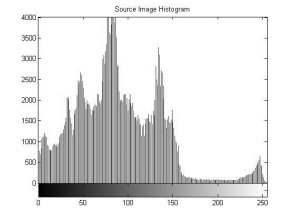 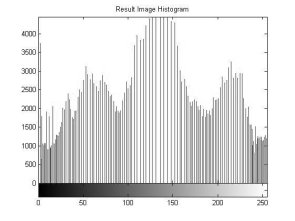 Estimation of the dispersion of brightness of the source image shows the value equal to 0.30. The contrast of the result image is increased by 0.41. The range lays the values [0,1]. The value 0 corresponds to a monochrome image, 1 to the maximum contrast. Thus the method brings the original dark and not clear image to the optimal bright and contrast one.

For noise removing we have implemented the median filter in a different way, so the filter works with the edges of the image as good as with its not border parts. The suggested algorithms are implemented by using Matlab. We use the RMSE and PSNR to evaluate the enhancement performance and then compare the calculated results with the results of such filters as Median, Wiener and filter2, removing Salt & Pepper noise, Poisson and Speckle noises. Lastly, the average value is calculated, which has shown PSNR is equal to 12.89957, and it’s way higher than PSNR of the considered filters. RMSE in its turn is equal to 60.0123.

For the image clarity enhancement we have implemented an improved algorithm based on the frequency filtering. This method helps to improve brightness and contrast, not speaking of the clarity of the image. In purpose to demonstrate the performance of the realized filter, the histograms of the source and the result images have been shown. Estimation of the dispersion of brightness which is contrast of the source image shows the value equal to 0.30. The contrast of the result image is increased by 0.41. Thus the results show that the proposed method is processing the image in optimal way and performs satisfying work.