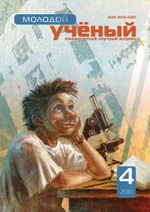 Men can live a normal life not only in highly developed economic conditions, they  are in need of good ecological conditions and permanent social processes. Humanity can’t exist beyond the nature. The nature directly influences on men’s health and state.

It is just to say that in the history of our country the XX century became the period of ecological catastrophe. Because at that time economy in Central Asian countries  and especially economy in Uzbekistan were developed without taking ecological conditions of those areas into consideration, and in result as it was notified by our President, one of very dangerous zones of ecological catastrophe appeared in Central Asia. Now many years and a very great deal of work are needed to cure that wounded land which had been touched for 60-70 years.

Thus we came into conclusion that it is not enough to deal only with the  development of economy and social maintenance in making humanity’s  life safe and hopeful, but we must give a problem our careful consideration  to ecological conditions, and only on solving these urgent problems we can make contributions to the development of economy, as we must not permit the nature to suffer.

President of our country  I.A. Karimov notifies, “Men must not be rude and arbitrated towards the Nature. The nature doesn’t forgive such kind of attitude shown to her by humanity[1]”.  In reality nowadays only the Oral Sea problems raise other additional problems as immensely exceeding in salt rate of soil, erosion of earth, air pollution and others.

Everything must belong to humanity            and all possible deeds must be performed to make men satisfied and happy. But we must not forget that men are not the main masters on the earth, they are only a part of it. Relying on this idea our President marks: “Artificial socialistic spiritual slogan, “Humanity is the master of nature” used in those years, turned the lives of people and nationalities, especially of those who live in Central Asia into tragic existence. That belief  brought them nearly to the edge of ravine, to the destruction of their genetic foundation[2]”. And now we and our future generation will have to take care of our planet, do their best in making our earth healthy.

And only when our country had become independent not so few deeds and acts on improving ecological conditions were carried out by our Government and its authorities.

▪ juridical basis on protecting and improving ecological and environmental           conditions was founded;

▪ necessary and important programs for many years on protecting the nature and natural resources were worked out and made them rationally be used, and now we are bringing these programs to life (The first stage went on till 2005 and the rest goes further);

▪ ecological activity was founded in 2009 and their members were given the right to be elected as deputies to the Legislative House of Oliy Majlis of Uzbekistan;

▪ diplomatic corps of deputies to Legislative House of Oliy Majlis of Uzbekistan was formed and it was given tasks to work out laws on solving ecological problems and perfect them;

▪ the national plan on the acts in protecting environment was worked out, and all possible means were shown for carrying  these tasks out irreproachably;

▪ national strategy on preservation of biological diversity and the plan of acts were worked out, and now necessary exact works are being carried out;

▪ the territories which must be especially protected are widened;
▪ the plan on national activities in preservation of environmental hyena were worked out and personalities who are responsible for carrying them out were defined;

▪ ecological safety is also taken into consideration in our country, and it is looked at as permanent and urgent task that must be carried out;

As for each country for Uzbekistan also it is important to choose correct components in estimation of ecological conditions. Nowadays various opinions on this problem are given in the literature on economy. On analyzing and generalizing them we came to conclusion to draw the following diagram. 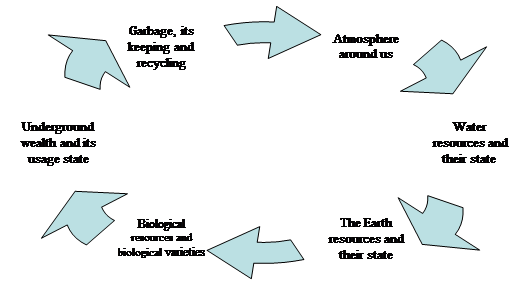 The diagram is on the connection of components used in valuation of ecological conditions.