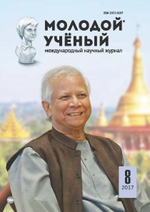 Аbstract. Studying of the theory of management decisions and their acceptance in practice in the conditions of changeable economic and the political situation which developed in our country will help the entities carefully and to deliberately make various decisions for scheduling of development and assessment of the existing reality. Professionalism of the manager consists in ability to develop, accept and implement managerial the decision without which the effective management of the modern organization which is quite often performed in difficult managerial situations in case of incomplete information and risk is impossible.

Efficiency of functioning of the modern organization in any sphere of activity from business before public administration is substantially determined that, how effectively it is controlled.

The increased competition level in business and the risen complexity of tasks of the public and local authority in the fast changing world impose additional requirements to the professional level of the one who exercises company management, bank and government institutions.

Presently, when are created and standards of project management find broad application, the decision making role in unusual, difficult situations, in the conditions of incomplete information and risk which the manager should face in real managerial practice is also significant. Besides achievement of leading line items in hard competitive struggle or management in the conditions of counteraction requires sometimes search and adoption of unique and the only possible decisions.

Management decision is a finding of a certain option of actions by means of identification and assessment of alternatives, implementation of these activities and its resulting effect.

Decision making reduces a gap between the present and the future of the organizations. This process is at the base of the planning activity of organization as the plan is a set of decisions on placement of resources for goal achievement.

For adoption of the correct decisions knowledge and experience are required. In it plays a significant role as well an intuition. It includes a presentiment, imagination, an insight. The developed intuition is an ability to hold everything that is connected with a problem, in the head during all process. The general and simultaneous coverage of a problem and its decision allows the manager with the developed intuition quickly to pass from a stage to a stage. Very often skilled heads, having made the correct decision, find it difficult to explain how they did it.

Acceptance and implementation of decisions — the difficult process consisting of several stages and steps. [1, с.230].

The stage of recognition of need of the decision includes stapes:

- recognition of existence of a problem;

- determination of criteria of the solution of problems.

Thus, acceptance and implementation of management decision it is possible to consider as rational process, i.e. as a series of stages and steps through which the manager has to pass to reach full implementation of the decision and elimination of the arisen problem. Whether it corresponds to real practice? Not always, as there is a number of the restrictions interfering application of rational model in decision making process.

- sometimes managers don't know that the problem exists as either they are overloaded, or the problem is well hidden from them;

- underestimation by some managers of observance of all process of decision-making or ignorance one;

- in many cases not all alternatives are considered, and at their assessment and the choice so-called qualitative or intangible factors are poorly considered;

- implementation of the decision not by all managers communicates with the decision. [2, с.63].

Besides, adoption of rational decisions in modern conditions is interfered by so-called «asymmetry of information».

With respect thereto at the heart of the decisions accepted now by firm, its management «routines» lie. Each of those — a certain steady set developed on the basis of experience and an intuition of methods and acceptances of the problem resolution. Moreover, even if the situation significantly changes and the firm needs to be reconstructed, it doesn't look for the original decision, and uses earlier developed, routine. Firms, avoiding risk of «rational decisions», conduct competitive struggle on the basis of «routines», determining the most effective of them as a result of market selection.

It is necessary to notice that in the given process of acceptance and implementation of the programmed management decision, in strict following at the same time of one stage behind another there is some convention. The matter is that the manager, making and performing the decision, quite often at the same time analyzes the current situation, sets the purposes and local goals of the next and perspective actions, predicts their possible consequences and options of succession of events, transfers information and orders to subordinates, approves the actions with them and other participants of management process, organizes, coordinates, motivates.

The important task for management of the organization (division) is, ensuring high quality and efficiency of the made management decisions. The main conditions of it is availability and use of the high-quality information characterizing parameters of «exit», «entrance», «external environment» and «process» of system of development of the decision

Any successful management decision shall possess the following high-quality signs: comprehensive justification, reality of the decision, timeliness, profitability (achievement of the best resulting effects in case of the smallest costs). [3, с.61–62].

Process of control is the activities of subjects of control directed to accomplishment of the made management decisions by implementation of certain tasks, methods. It is characterized by three components:

— substantial i. e. that is carried out in the course of control;

— organizational i. e. who and in what sequence exercises control;

— technological i. e. as control is exercised.

The control purpose — ensuring unity of the decision and execution, the prevention of mistakes and defects, deviations. Content of control is shown in the functions which are carried out by it.

Preliminary control is exercised prior to accomplishment of the decision. Its main task — to establish whether truly particular purposes and strategy is chosen. At this stage criteria for evaluation of the decision are developed and adjusted, there is a debugging of a technique of the subsequent type of control — current. Unsuccessfully developed control system can orient contractors not to accomplishment of effective objectives, and to satisfaction of requirements of control that is very dangerous to functioning of the organization.

The theory of decision making is under construction as generalization of practice of the best methods of decision making born in the sphere of public administration, business, in system of non-profit, public organizations. The best of them which proved the efficiency in practice quickly are picked up, generalized, adapt and are actively applied. So, in particular, business received a wide range of methods of adoption of strategic decisions from public administration (and the term «strategy» came from the sphere of a military construction and management). In turn, exactly in business modern highly effective planning methods, control, budgetings without which any organization of public administration can't do now were developed. Structures of civil society generated at first interest, and then and the urgent need to consider moral aspects of the made decisions. They promoted system vision of problems and decisions both in public administration, and in a business activity. [4, с.71].

There are features of implementation of management decision which, in turn, share on the stewardship is a direct management and an indirect management — it is reflexive management. The vast majority of managers at us in the country uses a stewardship — it is simpler, but the effect gives not always. For example, in administrative activities of the master orders in the form of the purpose, and in the orders arriving from government and other superior organizations and also from heads of the entities and the organizations, — most often in the form of «activities» prevail.

For example, «To increase production», «To bring order to the shop», «To strengthen fight against violators of discipline», «To reduce defect», etc. In this case the contractor himself can determine whether it is necessary to perform in general work and if it is necessary, then he also determines the term of its accomplishment, its quality. Accomplishment of such orders without certain regulations can drag on in 2–3 and more times in comparison with those orders which have the term of accomplishment, actionees of work. And such task will be first-priority for the contractor, and less specific task though, maybe, more important, it will be pushed by it the background. Very well practice of step orders which increases performance for 8–12 % works.

Let’s consider that, the cooperative or small enterprise builds the house. The current task is. But here if workers received a task daily is step, then performance sharply would increase. Observations showed that if work is given daily for all day, then at the worker the firm mode of day of work is gradually developed, the discipline of work improves, the working day is more fully used. It is obvious that application of the order with the step purpose in case of job management of people whose work doesn't give in to regulation would lead to the best use of working hours and would give a certain economic effect. A large number of orders with the task formulated in a type of activity, but not actions, won't be approved with the planned results. At the same time the above the organizational level the more the given principle of management isn't observed in administrative activities.

The research of administrative activity has shown that receiving by an unformalized task (because of the uncertainty and impossibility to subject to control execution) don't cause almost any actions from performers. [5, с.46].

In many cases an obstacle to increase in a share of instructions with the formalized task is inability of heads to reformulate unformalized tasks in formalized.

Today success of any case substantially depends on management decision, its timeliness and efficiency. Professionalism of the manager consists in ability to develop, accept and implement managerial the decision without which the effective management of the modern organization which is quite often performed in difficult managerial situations in case of incomplete information and risk is impossible.

The neoclassical concept of the economic organization proceeds from need of adoption of rational decisions by subjects. It is supported with the main conclusions of the theory of microeconomics — balance of the consumer on the basis of the rational choice (maximization of the received usefulness in case of this income), balance of the producer also on the basis of the rational choice (profit maximization in the short-term period). However it is necessary to state that actually rational decisions for firm are improbable. First of all, because of conciliation and unreasoned policy of economic actors.

Many researchers conducted in the USA demonstrate that even successful businessmen make reasoned and intelligent decisions only in half of cases. It is only possible to be surprised to how some businessmen make decisions which insolvency is visible even to the unsophisticated person. And improvement of quality of the decisions made by economic heads is the most important allowance of increase in efficiency of all social production.