Technology of fertilizer application for potatoes, the conditions required for the formation of high-quality tubers | Статья в журнале «Молодой ученый»

Technology of fertilizer application for potatoes, the conditions required for the formation of high-quality tubers

The technology of potato cultivation is determined by a set of operations performed sequentially, with certain means of cultivation in a limited period of time.

The most important component of a good harvest of «second bread» is the creation of appropriate physical-mechanical composition of the soil with the proper temperature, air-water regime and optimum conditions for plant nutrition in different phases of their development. [1]

Ensuring conditions required for the formation of commercial potatoes is achieved through soil cultivation and fertilizer application, in compliance with the best standards, terms and methods of application, with the use of the most suitable types and forms of fertilizers. [2]

The interest of scientists and agricultural specialists to the problem concerning the methods of fertilizer application for potatoes is easy to explain: changing the supply conditions can affect the growth of plants, increase cultivation conditions and increase productivity.

The concept of methods of fertilizer application includes not only the individual application techniques and their incorporation into the soil, but also activities contributing to the ability and efficiency of plants to use the soil nutrients. For example, spatial distribution of fertilizer in the soil relative to the plant. Some studies show that fertilizers used in a superficial layer with low precipitation during the growing season followed by plant feeding has little effect on potato yield. The main factor in the yield of potatoes is fertilizing before plantings the seeds and soil fertilizing during the planting as well at an optimum distance from the seeds and then at the right distance from growing inside the soil the plant root system.

Biological feature of potatoes is a weak root system, which is distributed in the soil not far from a parent tuber. The root system of a well formed plants is mainly located at the depth of 30...40 cm. That is why while fertilizing we should remember that the optimal placement of fertilizer is the soil with maximum content at the depth of 25...30 cm (Fig.1). 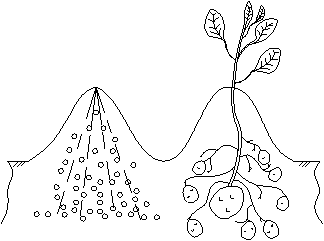 This way of using mineral fertilizers will allow to obtain maximum efficiency and increase yields under conditions favorable for the plants. [3]

As you know potatoes require throughout their growth for the formation of high-quality tubers doughy soil with a low level of compaction, as well as fine lumpy and well-aerated soil structure. For this reason, the main soil processing before cultivation of potatoes is carried out mainly by subsurface agricultural machines, because moldboard plowing helps the formation of large lumps of soil, which have bad affects on the yield and quality of final product.

The favourable structure for the development of plants is created by ridge cultivation technology, that causes its widespread. [1]

Such methods of solid fertilizing as surface (broadcast); local (soil) and combined are widely used in agriculture now.

The technology of the broadcast method of solid fertilizing consists of two separate technological operations — spreading of fertilizer on the surface of the field and their application into the soil.

This method is inefficient because of the uneven distribution of fertilizers. The disadvantage of this method is the patchy distribution of fertilizers in the topsoil, besides interacting for a long time with a significant amount of soil, they go into the form which is not easy to be assimilated by potatoes. The fertilizers placed by cultivators and disc harrows in the upper three-centimeter layer of the soil dry out, so, because of the high migration of nitrogen (one of the main elements of a food) they lose it.

The technology of the subsurface method is based on the use of machines equipped with plowshare groups for fertilizing into the soil with their concentrated placement at the right depth, without spreading over the soil surface.

The subsurface method of fertilizing is characterized by a certain fertilizer placement scheme and is divided into:

‒ band method with placement of strips in a vertical or horizontal plane;

‒ seed method (can be seen as a special case of the band one);

‒ volume method is characterized by mixing with some soil;

Agricultural machines and devices for subsurface fertilizing have different variety of designs and names. There is a classification on a technological principle. 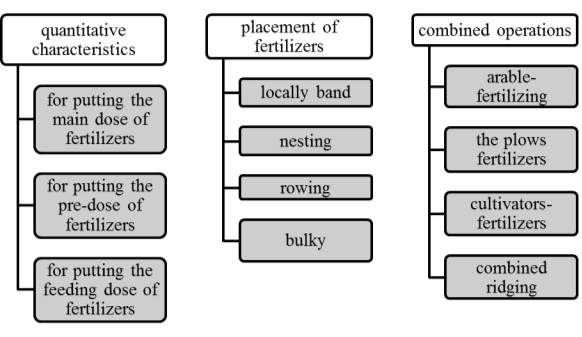 Machines for making varying dosage ranges of fertilizer are applied depending on the agro-biological characteristics of cultivated plants, namely, their needs for nutrients on appropriate phases of the growing season.

The division of machines according to the method of placement of fertilizers is determined by the characteristics of the root system of plants and above all by their ability to be placed in certain layers of arable horizon.

Referring to combined operations the machines are divided into:

‒ arable — fertilizer machine (main processing of the soil is combined with strip application of the main dose of mineral fertilizers on the bottom of the furrow);

‒ cultivators-fertilizers (the basic dose of fertilizers is introduced under subsurface soil treatment);

‒ sowing and planting combination units combine the sowing or planting seeds with putting of basic or «starter» amount of mineral and organic fertilizers.

The technology of a combined method of fertilizer application is performed by several agricultural operations within one single stage of the machine: soil treatment, fertilizing and putting them into the treated soil layer. Analysis of the application of the combined method of fertilizing shows such result as increased productivity, reduction of energy intensity of technological processes and increased efficiency of fertilizer using and technology.

The technology of the combined fertilizing method in areas with soil-protective system of agriculture (the Volga region) is the most effective. Today, there are many technical means being able to cultivate the soil, form the ridges, put and distribute the mineral fertilizers at the same time. Both standard and experimental aggregates have their constructive and technological advantages and disadvantages. That’s why the further development and improvement of the combined soil-cultivating aggregates are considered to be important. [1]