The main goal of the project - creation of a packet radio network of the branch TUIT.

The activities that complete to successfully finish this project: the system of packet radio service studied, the structure of the branch network analyzed, capabilities of software for radio broadcasting studied and analyzed. As result of analyses we choose software product that completely allow to our conditions.

        Platform for the organization, because of ease of use and prevalence has been selected Windows

        The broadcast server ICECAST was chosen because of its popularity, ease of setup and the openness of the source code.

Icecast is a streaming media server which currently supports Ogg (Vorbis and Theora), Opus, WebM and MP3 audio streams. It can be used to create an Internet radio station or a privately running jukebox and many things in between. It is very versatile in that new formats can be added relatively easily and supports open standards for communication and interaction. Icecast is distributed under the GNU GPL, version 2.

SAM Broadcaster is an Internet radio broadcasting application by Spacial. The name "SAM" is an acronym for Streaming Audio Manager, which describes the software's functionality.The software features functionality for running an Internet radio station from a single computer. It can be used for running Live Shows with a DJ selecting the tracks to be played and mixing the sound as well as completely automated, where the programming is controlled by various rulesets outlined by the operator using PAL scripts to select tracks and queue shows.

The research object of this thesis is the network branch of TUIT and the ability to organize the IP radio broadcast in the network. For the organization of the radio must be installed broadcasting server - IceCast2 software and broadcasting remote controller – SamBroadcaster on the Windows operating system of University server.

Product SAM Broadcaster is a program that allows live broadcasts, the program can generate playlists and publish them on the Internet, has a fairly succinct software of ether and rotation settings.

Icecast is a free software for streaming digital audio and video. Icecast is a server program that can carry out the distribution of digital streams in various formats, such as MP3, AAC, AAC Plus and others. The actual data transfer is realized by standard HTTP Protocol, or Protocol SHOUTcast.

For the solution of objectives it has been decided to use the following scheme of the organization of broadcasting pic.1. 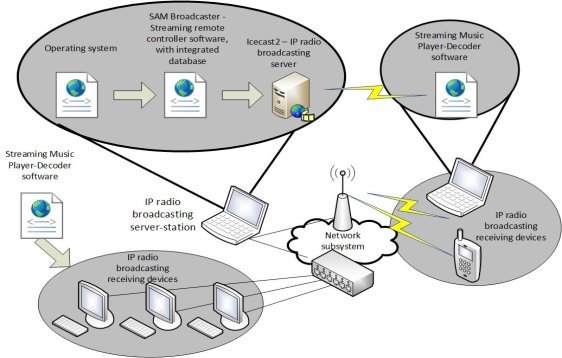 During the approbation the problem of decoding music player software also solved, by connecting radio-subsystem with university web-server, through the web page plugin. Pic 2. demonstrates how the scheme was simplified by using web-interface. 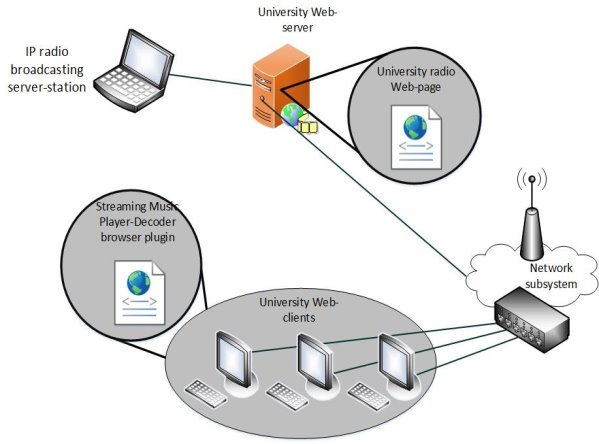 In the current degree project a main objective was the creation of package radio in networks of TUIT branch and carrying out its approbation. In general objectives have been solved completely:

        Various systems of package broadcasting are studied and analyzed

        Possibilities of the chosen software for broadcasting are studied and analyzed