According to B. P. Alisov”s (1950) climatic classification the Zarafshan valley belongs to Asian continental subtropical climate. The main characteristic features of climate are hugeness of light and heat; lack of precipitation of temperature, the difference of the temperature of the days and seasons (Babushkin, 1961). Such kind of climatic features of the area is connected to the geographical location and or graphical structure. This kind of climatic characteristics of the region belongs to the geographical location and orographic structure. Middle Zarafshan River is located in the center of Zarafshan valley, near the Samarkand concave; it is bordered by Hazara in the East and by Hazara in the west. Its northern boundary is connected with Koratag, Aktag, Karagchitog, Gubdintog and southern boundary is connected with Koratepa, Zirabulok, Ziyavuddin Mountain. Passing from the west to the East of middle Zarafshan basin the air temperature, the precipitation and either climatic elements change a lot. In hot summer very hot air stream comes there from Kyzyl-Kum desert. Therefore, air temperature is risen to 40–450C in the western parts (Navoi), in the eastern part it increases to 380C (Urgut). The average temperature is 28,30C in Navoi city and in July 24,40C in Urgut region. (Table 1)

It is seen from the 1st table that the air temperature is relatively higher in western part of Zarafshan valley than in Eastern part in all months besides January. Therefore, all agricultural products in Khatirchi, Narpay and Pakhtachi regions ripe before 15–20 days than the products of Urgut, Gallaaral, Jamboy, Bulungur and Akdaryo regions. In January, generally, air temperature of the valleyis much law in the Eastern part than the Western part. But this distinction is not as big as in hot months. It is necessary to know the duration period of hot months when at the beginning of the vegetation of decorative plants of many plants for agriculture. The vegetation periodfor the most heat — loving plants starts when the air temperature is risen above +50C and+100C

In the middle Zarafshan basin location the aggregate amount of days when the temperature is risen above +100C diminishes from west to east. For example, the multitude of total aggregate of temperatures which is risen above +100C in Kattakurgan region 42800C, in Samarkand 41600 C and in Urgut Region 37800 C (Agro meteorology). Thus, the total aggregation of temperature has been increased by 50000C from the west to the east. Such multitude of changing is connected with the height of the place. The main reasons of such difference of distinctions between eastern and western parts are the followings: 1) the influence of Kyzyl-Kum desert which is heating at the end of spring; 2) the location of Navoi city is below by 648 m than Urgut city. The height of air temperature at the main period of the year caused by the dimension of relative humidity. Daily average relativehumidity changes from 24 % to 61 % percent. (Balashavo, 1963). The number of days when air relative dampness is below 30 % presents the droughts of the climate.

Such kind of the days are 80 days in the west of the territory (in Navoi city) and 128 days in the east (in Samarkand city). The hot main distinction in relative dampness starts in April, with the increasing of air temperature. When it is decreased air dampness, it begins evaporation for plants, it requires frequent irrigation. Because of lack of relative humidity in the western part of the territory the amount of irrigation is higher than in the eastern part.

The precipitation of Zarafshan River is not so much. Especially, the annual precipitation is 120–150 mm in the western parts. The amount of precipitation increases from west to east. There are twice much perception in Urgut city than in Navoi city.(2nd table) 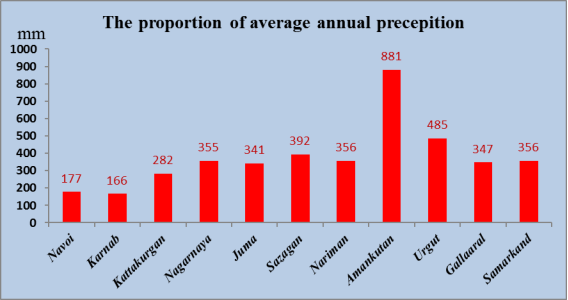 The climatologists classified the territory according to the climatic differently.

E. M. Balashov a(1963) divided the Zarafshan basin into 4 small climatic regions: 1) south-western 2) Nurota 3) middle Zarafshan 4) eastern mountainous part. L. N. Babushkin and others (1965) divided middle Zarafshan into 2 small climatic regions during regional division of south-western Uzbekistan. 1) Northern Samarkand 2)southern Samarkand. The boundaries are not convenient to each other. But it can be seen that there are some affinity between them by comparing them attentively.