Analysis of materials and technologies used in foundation construction of historical buildings in St. Petersburg

Analysis of materials and technologies used in foundation construction of historical buildings in St. Petersburg

The article made an analysis of materials and technologies used in the construction of foundations of historical buildings in St. Petersburg. Described in detail the characteristics of the materials that were used in different years, the construction of the city. Special attention is paid to the rubble Foundation. Shows the process works: trenching, laying of wooden sleepers, laying of the Foundation body. The main types of foundations, their classification. Also made a brief analysis of the possible causes of failure of foundations.

The volume of the pre-revolution housing of St. Petersburg is variously estimated from 15 to 20 million m2. Most of these buildings are located in the Admiralteisky, Vasileostrovsky, Petrogradsky and Central districts of St. Petersburg, so-called «Central security area» of the city. The foundations of such houses are mostly rubble, made from local stone materials, often with the presence of wooden elements — beams, raft foundations, piles [1].

As stone materials were used in the early years of the building of Saint Petersburg rounded rocks (boulders of igneous or metamorphic rocks), in later periods non rounded rock fragments (platy stone from limestone, dolomite, sandstone). Sometimes doing the whole foundation of burnt brick. The most widely rubble Foundation, which as a building material are mainly used in the platy limestone [2,3]. The foundations were carried out, as a rule, in the trenches that dig up without attachment, with vertical walls. The walls were mainly in lime mortar, all the gaps between the stones smashed the stones smaller sized. Used mainly technology or masonry «under the Bay», where rubble cushion layer-by-layer shed solution, or «under the blade» in which the coarse-grained material was placed by analogy with masonry [4]. The wooden elements in the foundations of historic buildings in the form of beams made of logs, with a diameter of 27–33 cm, stacked in the bottom of the trench or piles no longer than 6–9 m hammered in the ground from the bottom of the trenches, were used in the presence of weak soil and high groundwater level.

The absolute majority of historical buildings were built on a strip of rubble foundations under the load-bearing and self-bearing external and internal brick walls, foundations and interior walls are often laid at lesser depth, subject to the heating [5]. To protect the Foundation from washout, sometimes on both sides of each ribbon Foundation scored a short pile.

According to S. N. Sotnikov [6] size of the base is determined by rules of thumb, later — on calculations using the permissible pressure on the ground. The depth of the foundations was appointed by freezing, most often it ranged from 1.5 to 2.5 m. the Foundations were deep to the «mainland» (Sands, sandy loam, clay belt), slotting bulk soils and peat.

The edges of the Foundation was arranged at the level of the planning point. The shotgun performed waterproofing layer from a mixture of lime, crushed brick and iron filings, which covered the top of the rubble to see 3–4 Sometimes as a waterproofing used: elm, lead, burnt bricks, sawn slab of limestone, calcareous clay or clay solutions.

On top of the rubble Foundation are usually kept within alignment layer, which served as a preparation for brick or white stone walls.

In the present state of rubble masonry foundations of historic buildings have a high voidness (voidness of the masonry may reach 30 %) [7]. One of the reasons may be poor construction work. As a result, the filtration of surface waters in the cavities and crevices of the backing of foundations leads to completing their the surrounding soil due to the cryogenic freezing is experiencing stress and the subsequent development of defects in the body of rubble Foundation.

Another reason for the presence of defects in the rubble of limestone is ground water, which is highly sensitive to changes in natural and technical situations. Water is the main agent environment, destroying the rubble, from the regime and the properties of which largely depends on the activity of the destructive processes [8]. For this reason, the artificial lowering of groundwater is a very dangerous [9].

The rubble foundations of the buildings, with their individual design features (materials, designs and sizes), classified on three criteria: the cross-sectional shape; by material; by the presence of wood [10]. Referring to section 5 of the allocated types: right angle; speed; combo; solid plate. The foundations of all types had the projection at the level of the edge width to 10 cm and the number of ledges with a width of 10–20 cm in height limits (the foundations in the form of a plate and trapezoidal ledges had not).The material selected foundations: rubble, brick, combo (boulders — brick — booth). Boulders (whole or chipped) are found only in the lower ranks of masonry. In some cases, meet hewn granite and calcareous plates. Solution of foundations of all types — calcareous. The tree is found in the lower body foundations in the form of beams, raft foundations, piles, located neurona of groundwater. The metal elements of masonry foundations rarely includes.The width of the base is only slightly greater than the thickness of the walls, in most cases it is only 1.0 to 1.5 m. the Actual pressure on the sole of foundations sometimes 2–3 times more than the design resistance of the Foundation soil, as defined by modern standards.

According to S. I. Sotnikov [11] main material was crushed stone, mainly limestone, the foundations of this type are found in approximately 90 % of cases. Brick foundations are relatively rare (up to 1 % of cases), combo detail: fit-bathroom up to 9 %. Pile foundations are used only in those homes that are located in the area of distribution of peat (9 %), but not under all houses, but only about 50 % of these cases. Wooden sleepers are much more likely — about 20 % of all cases. Schemes of foundations of historical buildings is shown in Fig. 1.1. 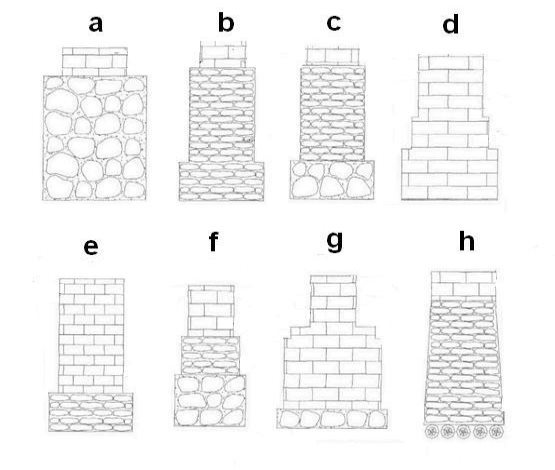 In St. Petersburg the main material of foundations of historical buildings of XVIII-XIX centuries was torn platy limestone, which was conveniently stacked. Platy laying the stone was performed on lime, lime-cement, cement, cement-sand mortar. Thus, in the construction of foundations of historical buildings occupied an important place in limestone, lying in many parts of Russia and produced in the form of a booth, and saw the hearth stone.

One of the main consumers of natural stone in construction during the XVIII-XIX centuries it was St. Petersburg [12]. In the early days of development of St. Petersburg a stone was understood as the bricks for construction of buildings and as a booth for their foundations. This means that the first and most important material in the creation of the new city was platy limestone from the local quarries. Construction limestone strata, a layered structure which is well seen in the coast cliffs, were formed in the Ordovician period of the Paleozoic era 435–500 million years ago. According to the structure and composition of this thin or fine-grained calcite or dolomite calcite limestone with an admixture of clay material. The layers of limestone separated by easily collapsing clay layers of different thickness, corroded ancient moves underwater Ordovician worms, broken natural healed cracks is also of Ordovician age. For this reason, the different layers have a natural color, strength and differ greatly their construction qualities.

From a large number known in the XVIII-XIX centuries the quarries that supplied Petersburg construction stone, limestone was used only a few breakings. Among the limestones, the most common were the Putilov, the Volkhov, Pudozh and Tosno. They did not possess decorative qualities and therefore, in St. Petersburg, served mainly as a constructive material.

The main material used in pre-revolutionary years for the construction of foundations in St. Petersburg was rubble stone. The depth was from 1.5 to 2.5 meters. Sole width slightly exceeding the width of the walls and ranged from 1 to 1.5 meters. The main reason for the destruction of the foundations is the fluctuation of groundwater.