This article briefly describes contemporary conditions of airport infrastructure across Russia. Demand in new modern facilities for passengers and cargo services is highly significant because of rapidly growing civil aviation tendency around the world. It is obvious that airports cannot catch fast development of passenger aircrafts. Investment in airport construction and infrastructure improvements are seems to be more attractive than few years ago. However, if financial model of airlines is clear, for airports there are too many factors and markets to have strong vision from business point of view. Another headache for airport managers and investors is forecasting the airports’ demand for infrastructure. It is usually very complicated to determine cost-efficiency of specific building or structure, which does not take part in direct operations. However, it has to be built for safe and smooth airport activity.

It is well known that most passenger flow is concentrated only at the biggest hubs [1]. In 2015 there were 254 airports in Russia. Figures across the country showed total passenger flow in Russia as of 159.3 million passengers per annum, see Figure 1 [2]. It is incredible that this figure slightly exceeds figures of average world hub. For example, passenger flow at Atlanta airport (ATL) had volume of 101.5 MPPA, at Beijing International (PEK) — 90.2 MPPA, at Dubai International (DXB) — 78.0 MPPA [3]. Five airports of total 254 in Russia keep 60.3 % of passenger market. Moreover 48.7 % goes to Moscow aviation hub (SVO, DME and VKO). According to the world tendency it shows low level of regional and local air travels. 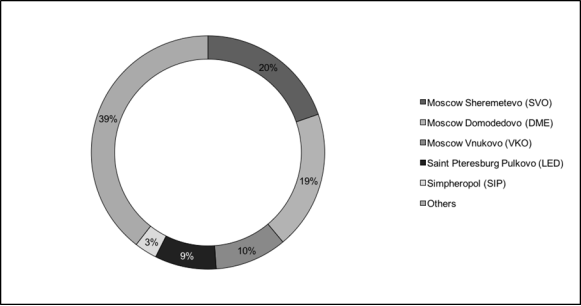 Progress in development of air travel in Russia is stopped by poor infrastructure of Russian regional airports. This mean necessity in significant volume of investment. Original customer for airports reconstruction and development is federal (regional) government. Unfortunately, efficiency of their planning process does not have enough up to date codes. Airport structures estimate cost system [4] was introduced in Russia in 2011. However, this system helps to calculate costs only for airfield structures and estimate methods were correctly criticized for their unfeasibility.

It is also fault to use analogue projects for the estimation purposes. Results will be insufficient because of individual features of each airport.

That is why modernization challenge of estimation algorithms for airport development is very important in the early stages of design [5]. Limits in federal budget really stimulates financing from the private sector [6,7]. But this is not fast process as it should be for appearance of positive dynamic in airport infrastructure improvements. In the purpose to attract private investments there have to be good reasoning for economic efficiency of such investments [8-12]. However, methodology for airport investment estimation and its economic efficiency is not known nowadays.

There are several reasons for that. One of them is lack of codes or official statements where it is list of obligatory buildings and structures at the airport except [13]. Another reason is absence of methodology for airport investment estimation. Today the investor can only use general or outdated methodologies [14-26]. But they only have common rules of estimation without any airport infrastructure features included [27].

Question about economic efficiency of airports is very important for involved managers of aerospace industry and government. This happens because airports as part of national transport system play key role in international, domestic, regional and local communication processes [29]. Today it is obvious that limits in infrastructure can cause huge delays for long-term economic growth [30,31].

Overall level of airport infrastructure can be stated as sufficient [32]. Most of Russian airports have outdated buildings, structures and safety systems [33-36]. This fact forces the government to finance airports development. Government spent 41.5 billion rubles for improvement hub airports in Moscow and Saint Petersburg and 15.9 more for regional airports by the end of 2015 [37].

Moreover, realization of such a significant capital investment could not be real without various national codes in this field [41-46]. Basic element in aviation code system is classification of airports and aerodromes. Annual passenger flow is the main indicator for airports all over the world. There are also several codes that classify airports for their purpose, length of the runway, surface bearing capacity for maximum aircraft take-off weight [47-50]. International classification of airports is stated in ICAO (International Civil Aviation Organization) documents [51-55].

There are also some schemes for state and private joint investments. One of the most well-known is Public-Private Partnership (PPP) [56-58]. In the table below there is an example of common scheme.

Information given above tell us that many elements for successful realization of federal programs are already exist. On the other hand, there are not enough elements and some constraining factors exist [59-63].

International factor is the case that the federal programs attract low financing around the world. Average outcome for capital investments is lower than average capital value, which in Russia in 2015 was 18.8 % [64]. 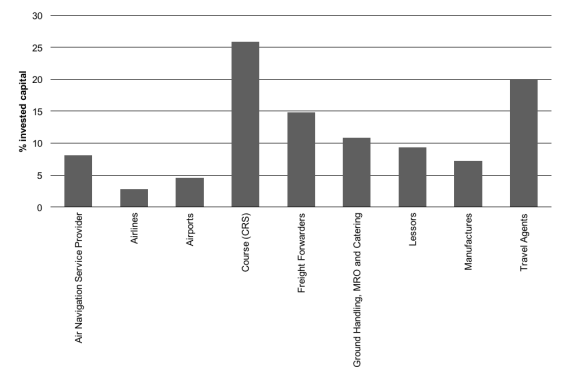 Additional services at the airport usually give more profitability than airport charges [66,67]. For example, ground handling, maintenance, repair, and overhaul (MRO) and catering give profit of 10.8 %, cargo services — 14.8 %. Investment in the airports infrastructure in average is only 4.6 % (See Figure 2).

Term efficiency means something that makes the effect and leads to the result. This means that efficiency is an ability to provide a result. And this is not a secret that human usually tries to reach the result with minimum consumption of the resources.

Consequently, while trying to determine the economic efficiency it is important to understand how much resources are going to be spend. Resources can be simply described with money value and well know methods [68].

On the other hand, there is no evidence in the determination of the effect. Effect can be found like a return rate. However, there are several projects that do not give profit: medical service buildings, water supply objects and some specific structure and buildings at the airport. Effect can be described with several figures. These figures cannot be measured by quantity, only with quality. This means that it is complicated to define the effect with just only costs. But it is ordinary in estimation of airport construction economic efficiency.

There are number of methods which can help to fight theoretical complexity of this question. When speaking about comparison of two quantities, expressed in numbers, there are two questions. How bigger (smaller) does one of them by a factor? How many more (less) does one of them?

There are three main possible ways to evaluate the effect and costs:

Except these three methods of evaluation it is also known the fourth one which is named as discount balance.

All above mentioned methods are usually used in two main concepts of cost-efficient evaluation.

In the first half of 20th century method of cost-efficient construction based on analysis of engineering solutions and their costs was discovered. This method is interesting because it does not need evaluation of the effect. In many cases it was the only one to determine economic efficiency of engineering design which does not give profit.

Essence of this method means that in the first step is evaluation of the construction project according the aim of construction. This is the project statement. Second step is evaluation of the construction project according resources consumption. This means development of financial calculations and their competition in term of the resource using. It is important to put all types to the same effect to compare costs correctly. Method called analysis of compared or relative efficiency and method where all types have to be in the same effect value were introduced in famous Russian economic monograph of V.V. Novozhilov [69].

In the same conditions applying the comparison method for choosing best design solutions for the same problem is better than the earnings estimation use. This is because profit forecast cannot be really reliable. Designer has to introduce the effect with minimum costs [70]. And he has to the have methodology for this.

Second concept for the cost-effective investment estimation is a concept based on confrontation of costs and earnings forecasts.

Its first axiom is an unequal from economic point of view materials and financial resources, consumed in the same capacity but during different period of time. This means that they are not equal in quality.

Second axiom is a rule which says that the effects and resources taken and given in the late point of time have less value than the same capacity in earlier period.

Third axiom is an assumption that there is method that provides an opportunity to forecast cash flow precisely for the next ten years (although it is doubtful).

Nevertheless, second concept dominates in most of codes and guidance documents. Reasoning for this can be good argumentation for the investors in the term of market although forecasts are usually very rough [71]. Moreover, explanation of calculating different factors to the same effect will be inefficient.

This mean that concept based on confrontation of costs and earnings forecasts is more preferable in case of airport construction.

Research confirmed that there is no good guidance for airport construction estimate in Russia. Existing methods can be hardly applied to such type of transport infrastructure. This leads to the problem with investments in airport development. Money can be hardly got from private or public investors. It is complicated to make right passenger forecast and develop based on this forecast plan for construction and refurbishment of airport facilities.

It was found that main reason for this lag is the fact that code system for the airport development lost its value. First of all, national airport standards have to be updated to the world most recent tendency in air transportation. Special methodology should be introduced to get balance between passenger flow and infrastructure volumes at the airport.