The damage to network security occurs frequently and increases daily, as well as the damage scale. Therefore, there has been an increasing interest in network security, and many protocols are at development to ensure security in mobile networks. However, many security issues are remaining. Mobile networks should have reduced handover delay times in order to provide good quality of service (QoS) to users, but with current security protocol developments, the handover delay time is increasing, which leads to lower QoS. This paper proposes a protocol that supports good security with fast handover in Mobile IPv6 based networks and juxtaposition host based protocol (Hierarchical Mobile IPv6) and network based (Proxy Mobile IPv6).

The packet delivery procedure in HMIPv6 (Figure 1): The packets sent from the CN are delivered to the HA since the current location information of the MN is not in the binding cache of the CN. Note that the BUR for the CN occurs after the completion of the route optimization (RO) with the CN. The HA forwards the packets sent from the CN to the MAP since the HA only knows the RCoA as the current location information of the MN. As soon as the packets arrive at the MAP, they are forwarded to the MN via the bi-directional tunnel established between the MAP and the MN. Then, the MN finally receives the packets through the tunnel. For instance, when the CN sends the packets to the MN located in the access link of AR1, the packets are firstly delivered to the HA where they are encapsulated to forward to the MAP. Then, the packets are encapsulated in the MAP once more and hence the MN receives the two-level encapsulated packets from the MAP before the completion of the RO with the CN. Note that the MN performs the RO procedure with the CN after receiving these non-optimized packets. The MN can hand off from the AR1 to the AR2 or AR3. In such cases, the packets are delivered via the newly established tunnel between the MAP and the MN due to the effect of the BUL procedure [1, 2].

The MAP only reduces the intra-domain signaling. When the MN moves out from the MAP domain, the effectiveness of HMIPv6 disappears. The MN, which hands off between different MAP domains, i.e., inter-domain handoff, needs to perform the BUR procedure for its HA and CNs as well as the BUL procedure for the new MAP [3]. 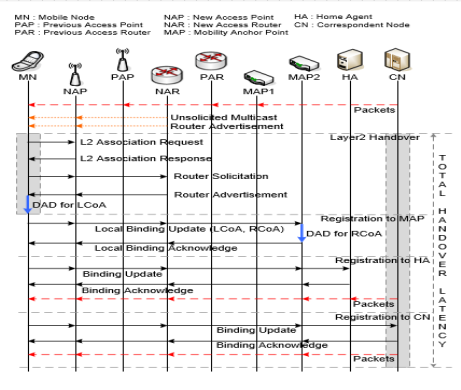 The location update procedure in PMIPv6: As the MN hands off to the LMD, the serving MAG sends a PBU message to its LMA. This causes the LMA to recognize that the MN is now under the MAG so that the LMA can manage its binding cache entry for the MN for managing the session and routing information. Hence, the LMA on receiving the PBU message allocates the home network prefix (HNP) and sets up its binding cache entry for the MN. The LMA sends a proxy binding acknowledgement (PBA) message as a receipt of successful location update for the MN so that the bi-directional tunnel between the MAG and the LMA is established. The created bi-directional tunnel is used for routing the packets to and from the MN. After the location update procedure has occurred between the MAG and the LMA, the MN receives the RA message including the HNP on the access link of the MAG. Then, the MN creates its proxy home address (pHoA) based on the HNP. For instance, as the MN attaches to the access link of MAG1, the location update procedure between theMAG1 and the LMA is performed. Then, the MN.

Configures its pHoA based on the HNP included in the RA message. If the MN hands off from the MAG1 to the MAG2 in the given LMD, the MAG2 also sends a PBU message to the LMA and then the bi-directional tunnel between theMAG2 and the LMA is established for the MN’s packet routing. Even though the MN changes its access link, the MN receives the same HNP in the RA message sent from the MAG2. In other words, the MN continually obtains the same pHoA that has been configured in the previous access link so that the MN can hand off without requiring participating in any mobility related signaling whenever it hands off within the LMD. 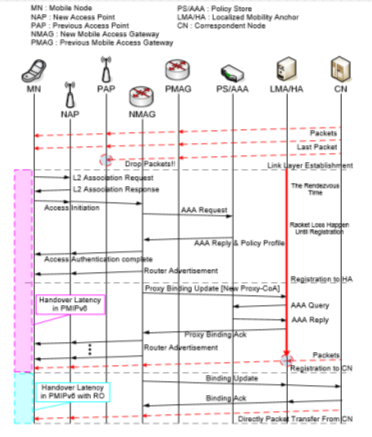 Then, the packets are capsulated in theMAG1 and then finally the MN receives the packets sent from the CN. Even though the MN hands off to the access link of the MAG2, the MN can receive the packets through the bi-directional tunnel established between the MAG2 and the LMA.This is because the LMA forwards the packets to the precise tunnel for the MN and the MN still uses the same pHoA in the new access link. PMIPv6 provides its mobility service only in the LMD so when the MN moves out from one LMD to another one, the MN needs to perform the MIPv6 operation. In this case (inter-domain handoff), the LMA located in the MN’s home domain acts as the HA and the MN needs to send a BU message to register its new location [4,5]. 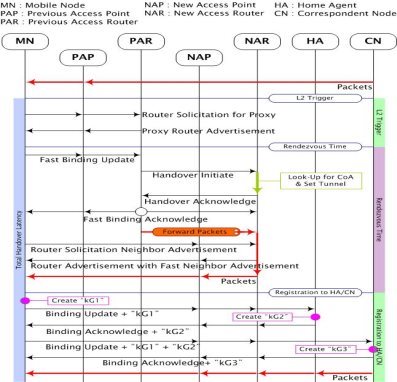 The handover latency in the HMIPv6 is due to procedures that take place during the handover, which are:

1. Attachment notification Tattach = 4t1 + 2t2, where t1 is the communication time between the MN and NAP; and t2 between NAP and NAR. There is also a signal-weighting factor α, since the communication is in the Link Layer. (αTattach);

The handover latency in the PMIPv6 is due to procedures that take place during the handover, which are:

4. Proxy binding registration delay Tbinding(LMA)2 = 2t4 + 2t5, where t4 is the NMAG and LMA communication time and t5 is between LMA and AAA;

5. Follow by another Router Advertisement message sent by the NMAG;

6. Followed by a Binding registration to the CN Tbinding(CN) = 2t4 + 2t6, where t6 is the communication time between LMA and CN; 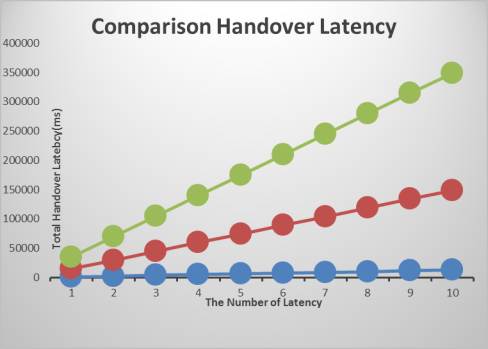