In modern economy, importance is given to small businesses. Thus, increasingly, economic development specialists are abandoning traditional approaches to economic development, which rely on a set of large enterprises with tax breaks, financial incentives, as well as other incentives. Instead, they rely on building a business from the scratch and supporting the growth of existing businesses. This article presents the advantages of a small business, as well as the challenges it faces. Further, there is a consideration of a small business in Russia, its historical development and the means of financing and some of the statistical information.

Experience suggests that economic development strategies aimed at attracting large firms are unlikely to be successful—or successful only at great cost. Further, because of the purported job creation role and innovative prowess of entrepreneurs and small businesses, creating an environment conducive to many small businesses may produce more jobs than trying to lure one or two large enterprises. The hope is not only that new businesses will create jobs in the local community, but, through innovation, some new businesses may grow into rapid-growth “gazelle” firms, which may spawn perhaps hundreds of jobs and become industry leaders of tomorrow. [1]Joseph Schumpeter, the renowned analyst and advocate of capitalism,asserted that the hallmark of capitalism is innovation: “The sweeping out of old products, old enterprises, and old organizational forms by new ones.” He referred to this process as “creative destruction.” In capitalism, therefore, the only survivors are those who constantly innovate and develop new products and processes to replace the old ones. Small businesses are largely thought to be more innovative than larger firms for three reasons: a lack of entrenched bureaucracy, more competitive markets, and stronger incentives (such as personal rewards). Small businesses are indeed crucial innovators in today’s economy and are the technological leaders of many industries More clear is that smaller businesses are more efficient at innovation, which means they produce more innovations for a given amount of R&D than do larger firms (Vossen). Thus, they often create more innovation value per given amount of R&D. Part of this may be due simply to underestimation of R&D expenditure at smaller firms, but others suggest that small firms are more effective in taking advantage of knowledge spillovers from other firms. Perhaps the industry with the greatest history of innovations by alone entrepreneurs and small businesses is the computer industry. The first personal computer, the MITS’ Altair (1975), and the first personal computer as we know them today, the Apple II, were developed and marketed by what were, at the time, very small businesses. The first software written specifically for the personal computer (BASIC) was developed and marketed by Paul Allen and Bill Gates as part of a small business, Traf-O-Data, which would later evolve into Microsoft (1975). The PC era arguably would have been substantially delayed if not for entrepreneurs starting small businesses. The large computer companies seemed to have little initial interest in personal computers. Hewlett-Packard, for example, rejected as nonviable the first Apple computer when it was developed by employee Steve Wozniak in 1976. It was the rapid sales of the Apple II that spawned development of IBM’s PC, which was not introduced until 1981. Xerox rejected a proposal in 1971 to design a “portable” computer and rejected multiple proposals in 1976 to market its personal computer, Alto, which was designed in the early 1970s for research use. Clearly, many of the great innovations in this industry were made by lone entrepreneurs and small businesses. [2]

BMGI consulting company that collaborates with every level of business to create and execute strategy that delivers innovation, growth and outstanding operations carried out research they have not found that many big companies are looking to create more innovative cultures. «our first studies in 2009 and little has changed since»- experts say. It seems big companies are struggling with innovation and a better innovation process is at the top of the agenda for most CEOs, but the idea of a more innovative culture appears too frightening to many. [6]

There’s no doubt that life and business have gotten more complex, even as certain tasks and activities have become easier due to information technology. However the problem is that some innovations are useless. Manufacturing and services are increasingly targeted at smaller, specialized markets due to the flexibility that IT provides in these areas. The 3D printing revolution is a perfect example. We know from our knowledge of the patterns of evolution that, in reality, systems tend to become more complex as they evolve, then become simplified again. The problem is how to develop better systems-thinking capability so you can design your business models, processes, products and services in a way that minimizes unnecessary complexity.

It is said that in today’s world nothing is changing more, or growing faster, than information. A March 2010 estimate put global Internet traffic at 21 exabytes—21 million terabytes. By 2016, global traffic will reach 1.3 zettabytes, according to a report released in May 2012. Every day, 2.5 quintillion bytes of data are created. The ability of companies, much less individuals, to consume and make sense of the information that is available (and necessary) to make good decisions is becoming a nearly insurmountable challenge. The problem to be solved is to deal with this mountain of information with both technology and human know-how, then to convert this information into valuable knowledge. Despite various problems the SME sector in Russia has steadily grown since 2005, both in terms of SME number and turnover. Definition of SMEs According to Law 209-FZ, legal entities, individual entrepreneurs and peasant farms are deemed to be small or medium businesses if they meet three criteria regarding ownership structure, workforce and volume of revenue. Key components of SME classification in Russia are similar to those used in EU (please see figure 1):

Considering these criteria the current share of SME in GDP is estimated at 20–25 %, which is not only significantly lower than in developed countries, but incomparable to developing ones as well. The number of SMEs per 1000 people is 2.5 times lower on average than in Europe (as represented by EU-27 countries). Employment in the SME segment is 1.7 times lower on average than in Europe (measured as a share of total employment,).This fact, as well as the SME regional and industrial structure, shows the underdevelopment of the sector.

Industrial structure of Russian SME segment indicates the underdevelopment of certain industries: more than half (57 %) of SME turnover falls within the trade sector. Manufacturing accounts for 11.5 % of total turnover, construction — 11.0 % and real estate — 9.7 %. Together these four sectors amount to approximately 90 % of SME turnover. The share of every other sector does not exceed 5 %. [3] 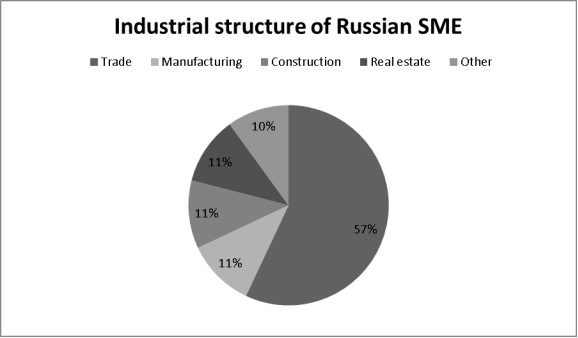 Regional structure of Russian SME segment demonstrates uneven distribution of SME turnover: approximately 80 % of SME turnover is located in the European part of Russia, with 48 % of total SME turnover coming from the Central and North West Federal Districts. Additionally, SMEs located in Moscow and Saint Petersburg generate 18 % and 7 % of total turnover, respectively.

One of the key constraints to SME development is low availability of financing. Leasing, factoring and others are not widely popular. Most common purposes of using external financing are investment purposes (equipment, transportation vehicles, etc.) and working capital — 55 % and 47 % respectively. SME business in Russia is one of top priorities for the Russian government. Doing Business research was chosen as an indicator of SME sector development. According to the most recent report Doing Business 2014, the Russian government measures implemented in 2012–2013 helped Russian Federation to move up 20 positions, one of the top-5 biggest improvements in 2013. The goal set by the government is to reach the top-20 by the year 2018.The starting point of the development of state support to small business was 1989, when the Unity of Small State Enterprises in USSR was created. In the modern history of Russia the state support for SME received its legal framework in 1995 with the adoption of Federal Law No. 88-FZ on State Support for Small Business in the Russian Federation. This law set the framework for state support to small business in Russia, forms and methods of state stimulation and regulation of small business activity.

Starting from 2004, the total number of small and medium enterprises has grown by almost 30 % from 3.4 mln to 4.4 mln..A new law that decreases the social tax amount for individual entrepreneurs has been passed from 29 December 2014 and was named tax holidays. Turnover of small and medium enterprises has steadily grown during the post-crisis period (starting from 2010). Stagnation was indicated in 2012.

Taking into account individual entrepreneurs with 2.9 mln employees, the total employment in Russian SMEs is 16.1 mln people, which is 23 % of the total number of employees in Russia.Financial support for small and medium business is exercised through different channels. One way is through regional governments. In 2012 subsidies from the federal budget to regional budgets, with a focus on support to SME, were RUB19 bln (EUR475 mln). An additional RUB18 bln (EUR451 mln) is to be distributed in 2013. The volume of annual support is approximately 0.4 % of the total loan portfolio of all banks to SME. These subsidies are meant to increase the volume of regional programs of support to SME that will in turn increase the number of companies which will receive financial support. The distribution of subsidies is not uniform across all regions. Regional leaders are: Moscow (7.5 %), Krasnodar Krai (5.0 %) and Saint Petersburg (4.6 %). Regional outsiders: Jewish Autonomous Oblast (0.1 %), Chukotka Autonomous Okrug (0.03 %), Nenets Autonomous Okrug (0.03 %). [7]

However, the business ombudsman Boris Titov is resolute. He said that the country needs massive methods of incentives. There is a need for massive strong measures to support small businesses. Thus, with the support of the state, small business will live and grow. But the entrepreneurs themselves have an active position in relation to their future and the future of the country. Small businesses have been able to independently initiate and organize the first inter-regional economic forum of small businesses in Russia under the name «Growth, in spite of global challenges». All these talk about the prospects of a mature economy. [4]

The main reason for these changes is the beginning and development of the «information revolution», leading to the formation of a new economic system.

D. V. Tulin Looking seignior age, or the easy way to prosperity (Review of the controversy around the policy of the Bank of

The main purpose of this study is giving a general review of M&A finance and banking sector from 2011to 2015; to assess its impacts on the

The emergence of the big banks and financial corporations is inevitable in the context of economic integration.

After a thorough literature review, it became obvious that many scholars had been trying to find the link between R&D and growth and that there were two contradictory points of view.

In about quarter of the century, foreign investment in Vietnam has gained important achievements, made a great contribution to economic growth

The main reason for these changes is the beginning and development of the «information revolution», leading to the formation of a new economic system.

D. V. Tulin Looking seignior age, or the easy way to prosperity (Review of the controversy around the policy of the Bank of

The main purpose of this study is giving a general review of M&A finance and banking sector from 2011to 2015; to assess its impacts on the

The emergence of the big banks and financial corporations is inevitable in the context of economic integration.

After a thorough literature review, it became obvious that many scholars had been trying to find the link between R&D and growth and that there were two contradictory points of view.

In about quarter of the century, foreign investment in Vietnam has gained important achievements, made a great contribution to economic growth