Class-related Characteristics of Enjoyment, Anxiety and Boredom in Early Adolescents in the Context of Bulgarian Junior High School

The appraisals of pupils in affective domains are important for various perspectives. It is well known, that in the stage of early adolescents both, the social-cognitive and social-emotional competencies show a dramatic increase. They begin to think abstractly and in shades of gray; they are able to analyze situations logically in terms of cause and effect and entertain hypothetical situations and use symbols. [1, c.11] They can reactself-consciously and empathic. Development of their identity has a positive influence on the absorption of emotional sensitivity and skills for its regulation. [1, c.17]

The present article addresses the investigation of the appraisal’s processes among the early adolescents. Specifically, there are used three from the nine scales in the questionnaire, developed by Pekrun, Goetz, Frenzel and Perry [2], namely enjoyment, anxiety and boredom. Pekrun’s control-value theory implies three-dimensional taxonomy to describe the emotions: object focus, valence and degree of activation. [2, c.5]. All three emotions are regarded like appraisals about the habitual behavior during the classes. Further, Pekrun’s control-value theory proposes that enjoyment “is aroused when (pupil's — app.m.) activities are experienced as both controllable and valuable” [2, c.6]; “boredom is induced when the activity lacks any incentive value”; anxiety is related to potential success and failure and to the subjective importance of these outcomes [2, c.7].

With respect to the differences between the appraisals of enjoyment, anxiety and boredom, I have assumed that there are underling factors, which determine their characteristics for the sample. Empirical evidence for my hypothesis rests upon the factor analysis, using SPSS 10. for Windows. My major research question was which combinations of statements would be best to assess the habitual emotions enjoyment, anxiety and boredom. Participants were 343 pupils from four junior high schools in district Smolyan. The sample includes students from the fifth (114), sixth (162), seventh (49) and eighth(18) grade. They had to assess their emotional experiences through five-point Likert scale from “strongly disagree»,, “disagree», “neither agree, nor disagree», “agree” and “strongly agree».

The questionnaire demonstrates more than sufficient technical adequacy when exploratory factor analysis was carried out. Means of all items describe the central tendency of pupils appraisals. It means, that for the scale enjoyment, it bunches around 3 — for example, the item’s mean, for “I enjoy being in class” is 3.3. For other items of the scale as “I am happy that I understood the material” the mean is around 3,8. The resulting means for the scale anxiety are lower — they tend to 2: namely, the statement’ s mean for “I worry whether the demands might be too great” is 2, 2. The means in the scale boredom are also negative, as a whole: for example, mean’s score for the statement “I’m tempted to walk out of the lesson because it is so boring” — is 1.7. The standard deviations for all items of the instrument are above 1 — this implies, that within the general process of emotion’s appraisals can be found very different organismic and logical constraints. Pupils compare their sensations, activate specific values and after that draw an inference from the synchronized appraisal processes

The correlation R-matrix shows relatively low scores. The Pearson coefficients are greater than 0.05 for claims, such as: “I am motivated to go to this class because it’s exciting.” and “I get excited about going to class”(0.47) — for scale enjoyment; “I worry whether the demands might be too great” and “I worry whether I’m sufficiently prepared for the lesson”(0.54) — for scale anxiety; “I get restless because I can’t wait for the class to end” and “I’m tempted to walk out of the lesson because it is so boring” (0.629) — for scale boredom. Similar patterns of relationships are few. Therefore, I have not eliminated any statement at this stage of factor analysis.

The Kaiser-Meyer-Olkin measure of sampling adequacy is close to 1 -.915 what indicates the possibility of conducting factor analysis. Bartlett’s test confirms that the correlation matrix is not identical — the measure amounts to 5351, and the test is significant (the significance value is. 000). Therefore, I have extracted factors with the eigenvalue grater than 1. The program identified six factors as shown in the Table № 1:

From the table, it is clearly that the cumulative percent of explained variance comes to be total 59, 25 %. However, two first factors explain the large amount of the variance. The other four explain the smaller part of the variance. The communalities for all items in the SPSS output are higher than 0.4 — for example, the statement “My enjoyment of this class makes me want to participate”(scale enjoyment) has been loading 0.66 before rotation; the statement “Even before class, I worry whether I will be able to understand the material” — 0.5 (scale anxiety); the statement “I get bored” — 0.68 (scale boredom). The highest loading has the statement “I am glad that it paid off to go to class” in the scale enjoyment — 0.75. Even so, let’s further follow what the scree plot shows: 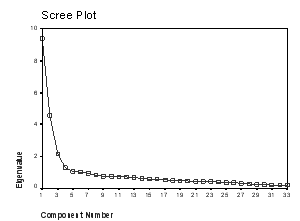 The point of inflexion of the curve is between third and fourth factor. However, the rotated matrix of the principal component analysis determined two factors. The first factor covers the following statements:

The loadings in the first group cause to be visible from the negative correlation between boredom and enjoyment. What lets pupils to boring this makes them to be not joyous: if they find the class dull they are not glad to go into this class; if they tempted to walk out of the lesson, they don’t enjoy being in class. Therefore, I could regard the boredom and enjoyment as two sides of the pupil’s activity — the first one as a passivity; the second one — as a desire to participate in the lesson. Unfortunately, for this sample the boredom has higher loadings.

All statements in the second factor with the exception of the last belong to the scale “Anxiety” in the original questionnaire. The statements describe the cognitive, affective and physiological antecedents of the anxiety. Pupils feel troubled about teacher’s demands during the lesson, about the understanding of the curriculum and about the potential competition with their classmates. To get excited about going to class could be regarded also as an expression of the anxiety, whether it will be interpreted as positive or negative nervous tension.

The conducted factor analytic research revealed the underling characteristics of boredom, enjoyment and anxiety during the classes. It contributed for changing our notions about the relationships between boredom and enjoyment during learning and instruction. High factor loadings indicate that boring during the lesson does much harm to pupil’s activity. Even, if pupils enjoy learning their engagement during the lesson might be not so strong. They invest less efforts to listening to the teacher, to participate in classrooms work and to look forward to the learning.

From this view, it is clear why the anxiety is the core of the second factor — readiness to participate in classrooms works. The ambiguous expectations, what will happen within an hour, extended the unproductive efforts of the pupils. They start to think about difficulties, connected with the learning and communication with both, the teacher and the classmates.

In sum, the principal component analysis on the scores within the sample of 12–15-aged Bulgarian pupils, contributed to better understanding of enjoyment, boredom and anxiety. The results support the validity of the above-mentioned scales of the questionnaire, developed by Pekrun, Goetz, Frenzel and Perry [2] for measuring performance’s emotionality during the classes in junior high school. Some of the statements could be eliminated. Shortening the scales would facilitate their use in teaching. For example, the statements “After class, I start looking forward to the next class”(scale enjoyment) and “Because the time drags I frequently look at my watch”(scale boredom) from one factor. They reflect two opposite aspects in the behavior of students — the first statement has high loading -797; the second one lower -.486. Which of them remain — a question that researchers can reflect. If the measuring of the pleasure to participate in the lesson is more important then only the first statement can be maintained and the second — can be dropped. However, in this case, the questionnaire again will provide sufficient reliable information about the emotional assessment of pupil.

Then, for assessing the reliability degree, SPSS software was used.

Self-reports of scale “enjoyment” in the AEQ exhibit more than sufficient technical adequacy when used with 12–15-years...

Boredom of Students in the Learning Environment of Bulgarian’s Junior...

Then, for assessing the reliability degree, SPSS software was used.

Self-reports of scale “enjoyment” in the AEQ exhibit more than sufficient technical adequacy when used with 12–15-years...

Boredom of Students in the Learning Environment of Bulgarian’s Junior...