Operatively dispatching management of mill manufacture in conditions of uncertainty

1 Introduction. In developing the main production automation products of milling industry, a number of problems of scientific and practical problems associated with the complications and uncertainty of operating conditions of the process of primary processing of grain, as well as looking on the levels of harvested seed cotton feedstock (raw material uncertainty in quantity and quality).

Therefore, the administrative decision adopted by the leadership of the milling companies in the face of uncertainty, when the head is not possible to estimate the probability of future results. This happens when calling within the parameters are so new and unstructured, that the probability of certain consequences can not be predicted with reasonable certainty, probability.

Sometimes administrative decisions under risk, when it is not determined the results of their implementation, but the probability of occurrence of each of them is known. The uncertainty of the result in this case is related to the possibility of adverse situations and consequences in order to achieve their goals.

2 The purpose of the task. Making decisions — a necessary component of any process control system. Consider the place of decision-making in the general scheme of management [1] as shown in the figure below.

According to the scheme of the control system are exposed as a SOS the external environment and from the metasystem. Under metasystem will understand the control system of a higher level. The ACS flour mills it may be branch automation or parent organization in the management hierarchy. Metasystem generates appropriate management effects that come on the control object and change its status. Metasystem oversees the management; follow the changes of the output characteristics of the control object. The set of values of the output characteristics of the object determines the final effect obtained in the management process, the outcome of the sludge. The external environment also affects the state of the system and control object, distorting the values of control actions and outcomes. 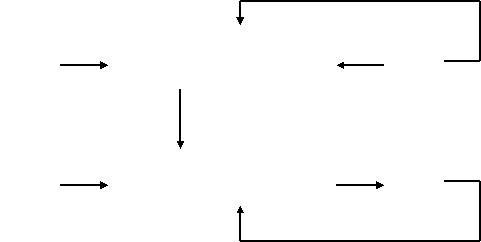 Fig. The general scheme of the control system.

The process management system is reduced to the development of control actions taking into account the set objectives set metasystem Z, available resources C and possible states of the environment T.

3 Function model. The functional model of the control system in these conditions can be set for each display

, is associated with control actions.

In turn, the outcome is determined by

available to the object resource management

state of the environment. The functioning process control object describes the display

for which each set of

corresponds to the outcome of a variety of outcomes

algorithms determine the functioning of the system and control object. To describe the operation of the control system is necessary to ask management objectives, according to which, and develop the controlling influences. The object of the control, although it may have its own (internal) objectives, needs to set goals were metasystem. This is achieved by selecting the control actions.

the nature and their interaction with the environment decision-making process takes place in a variety of conditions:

When making decisions under conditions of uncertainty between the choice of strategies and the outcome is not unique relationship. In addition, also known probabilities, a lot of probabilities of outcomes

management strategies that either can not be identified or do not have the problem in the context of a meaningful sense. Hence the Decision Rule takes the form

As a result, each pair of display strategy — the outcome is assigned a score metasystem (winning). The most common implementation of the rule is the criterion to maximize the guaranteed win.

The uncertainty in decision-making is shown in the parameters of the information used at all stages of processing. Uncertainty is difficult to measure, and often it is evaluated in terms of quality (high or low). Also, it was evaluated in percentage.

Uncertainty is the main cause of the risk. The decrease in volume is the main task of the head. The uncertainty associated with the development of management decision, and the risk — the results of the implementation.

Most people mistakenly believe that the use of some particular characteristics of the probability distribution of the result is easy removes the difficulty of choosing the best solution. For example, often use the expectation of results; sometimes — dispersion. However, in practice, the choices on the basis of such characteristics are not always in line with the personal views of decision-makers about the best alternative. In particular, it is also due to the fact that, in describing the problem with the risk, decision-makers rarely uses such theoretical concepts as «probability distribution», «random variable», «quantile» etc. Instead, people usually operates with such concepts maloformalizuemymi as «chances of winning», «the possibility of failure», «gravity of the consequences», and others. He perceives them as the more familiar, and therefore, more reliable. I would like to selection rules have also used such simple and clear decision-maker judgment; that on the basis of such judgments could retrieve first effective and, if necessary — and the best alternative.

«In this regard, it agrees well with the practice of following verbal formulation of the principle of stochastic dominance: the best variant of the decision, for which the higher the probability of obtaining a more favorable result».

In other words, to establish what yl two options — a or b — solutions better decision-makers just need to consistently «sort out» all possible current values ​​of t result from the check, which one probably more: P (Y (a) ≥ t) or P (Y (b) ≥ t).

The uncertainty in the development of the administrative decision may be due to the following reasons: a lack of credible information; difficulty in processing information; monopolization of the necessary data by external controls.

In this regard, it agrees well with the practice of following verbal formulation of the principle of stochastic dominance: the best variant of the decision, for which the higher the probability of obtaining a more favorable outcome.